Positive results from Sand Life – the rare bird Tawny pipit (Anthus campestris) increases again and a negative trend has finally been turned. Since 2013, the number of home ranges in Skåne – the only ones in the country – have increased by 20 percent. The increase has a direct connection with the restorations within the project.

The trend at the beginning of Sand Life

Over the past 100 years, the open sandy fields have decreased drastically in the landscape, a consequence of, among other things, the exploitation and planting of species such as Mountain pine and Japanese rose. The development has been devastating to many plant and animal species, including the Tawny pipit. The Tawny pipit was a relatively common bird in Skåne in the early 2000s, and was occurring in sandy habitats in southern Sweden, but it has become increasingly unusual as the open sandy areas have decreased.

According to the Artdatabanken, 1983 was still 210 home ranges in Skåne and 50 in Halland. In 2013, the ornithologist Patrik Olofsson counted the number of home ranges that had dropped to only 33, all in eastern Skåne, the lowest ever figure.

Clear rise at the end of Sand Life

After the restoration actions in Sand Life, with removal of pine trees and Japanese rose and increasing the amount of bare sand, Patrik Olofsson has counted the birds again. The new inventory shows a clear increase of Tawny pipits and 40 home ranges were found in 2017. The inventory shows a large number of birds on and around newly opened, burned or otherwise treated surfaces (eg, Brösarp’s northern slopes, Ravlunda, Drakamöllan, Kumlan-Möllegården). The negative trend has not only stopped; it has also turned!

In August 2016, Sand Life was invited to speak at a workshop on the theme restoration of sandy habitats in LIFE-projects in German Freising outside Munich. Sand Life highlighted the lessons we have learned in the Project so far, both in terms of restoration actions and the importance of communication. The workshop was part of a larger conference SER2016 of “Best Practice of Restoration” with 330 participants from 41 countries. 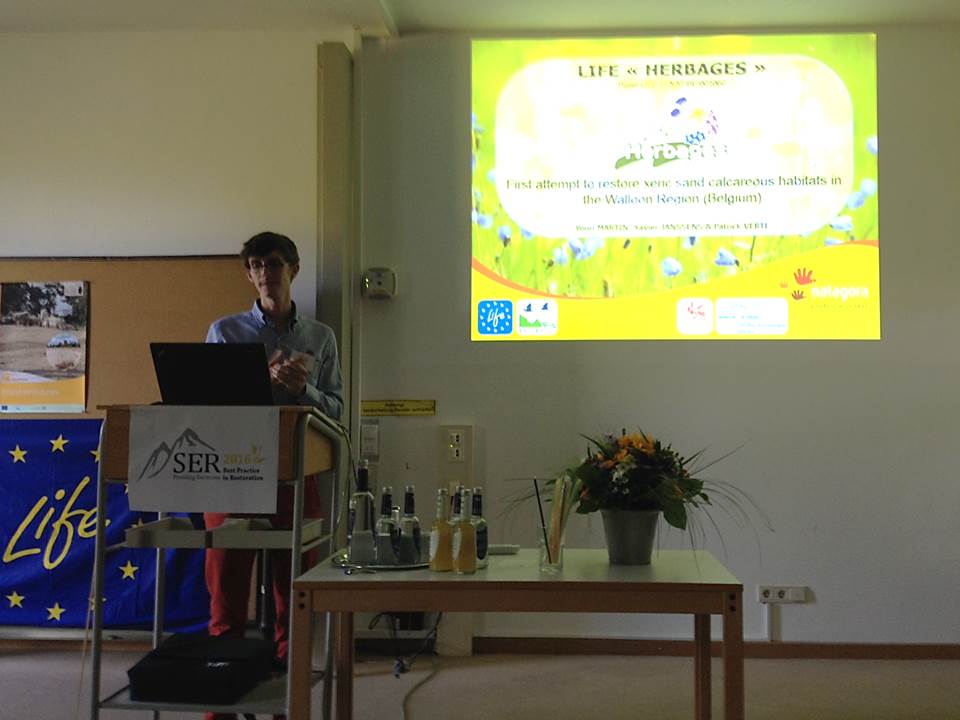 At a mini-workshop in 16th and 17th of August the project managers met up at the project sites in the County of Halland to discuss restoration actions and best practice. The regional project leader Magnus Nystrand showed the results after the hard work of removing Rosa rugosa in the sand dunes. The majority of the plant material has been removed and the discussion now is what to do with the remaining tilling’s coming up.

At large areas Pinus mugo has been removed and here we can see the sand reclaiming the site. 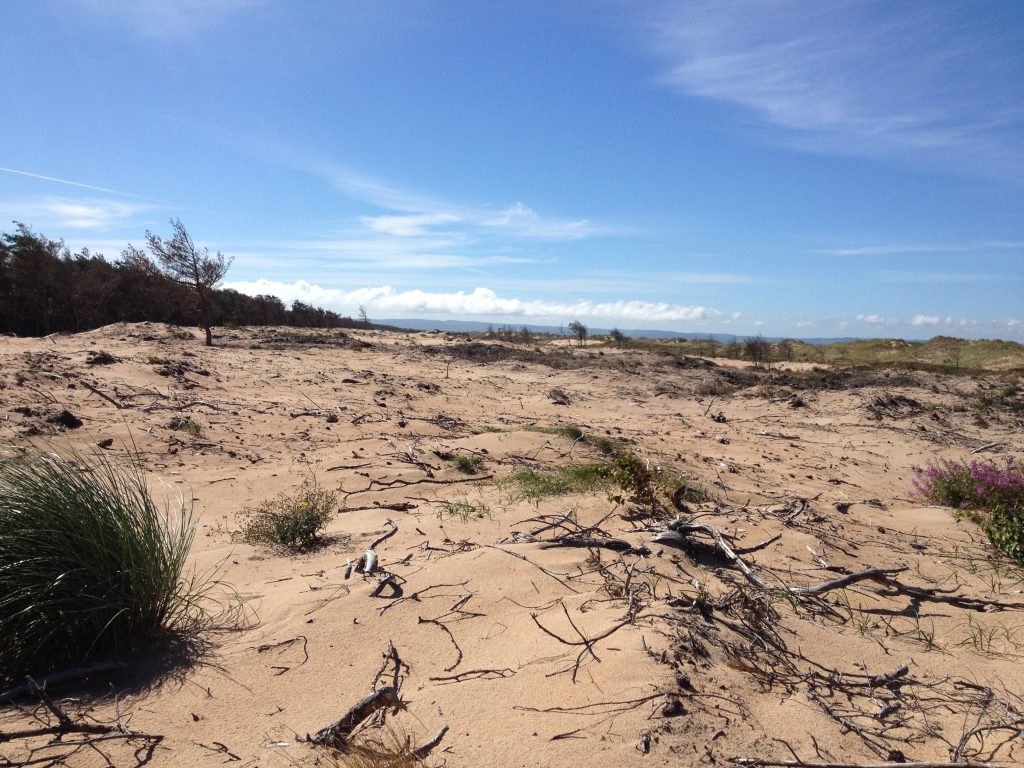 At four locations in the sites, the project outdoor museums have been built up to inform the public about the values in the sandy habitats and how to manage them. Here the outdoor museum at Laholmsbuktens sanddynsreservat. 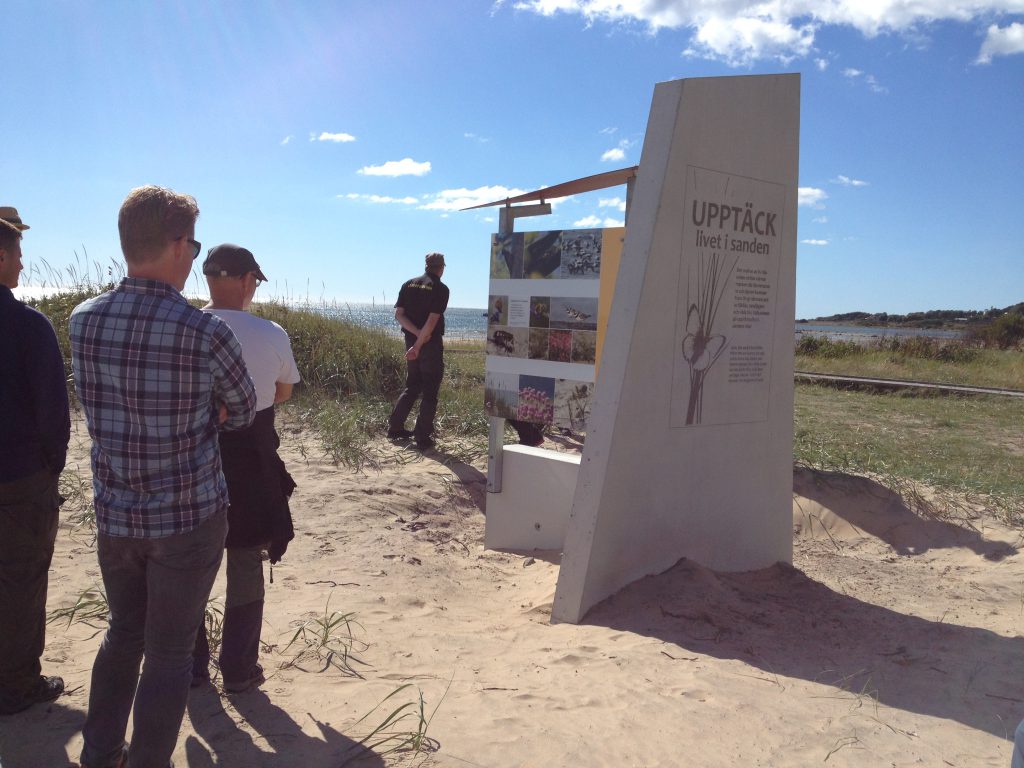 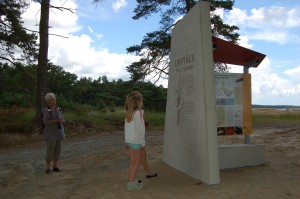 The first outdoor museum in Sand Life was displayed for the public at Rinkaby firing range in Skåne at the 2nd of June 2014. The monument is build close to the flowering calcareous grasslands “sand steppe”, one of the most unique sandy soils in southern Sweden, and explains why the area is so special. Open Air Museum has three major components; they signal that life in the sand is extremely rich in species, they give us information on sandy soils and ultimately what is most exciting in that particular area.

-An Outdoor museum gives us information about what we see on the ground, says Karin Hernborg from Kristianstad Water Reserve that is responsible for the production of twelve outdoor museums in Sand Life. At Rinkaby firing range we learn why the military operation has been so important to the natural values of the field, the exciting discoveries that can be done on site and the endangered species that is so unique in the area. At Rinkaby you should try to find bugs in the dung, smell the fragrant pinks and listen to the wooded tree lark warbling ly-ly-lu-lu-lo in the air. -Our Outdoor museums are important tools in communicating why we need to restore sandy soils, says Gabrielle Rosquist project manager for the EU project Sand Life. Should we not lose the high number of threatened species and habitats that are available on the sandy soils, these must be opened up for animals, plants and fungi, as well as, becoming more accessible to us as visitors. 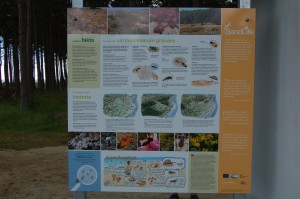 The sandy areas in southern Sweden.

Anyone who does not get to Rinkaby firing range can look at a similar outdoor museum at Friseboda south of Ahus.